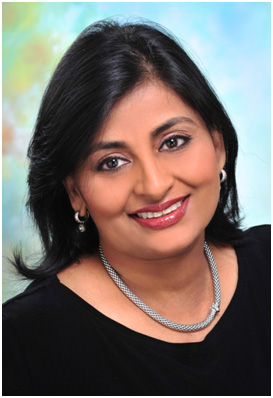 Dr Rabia Goolam is a specialist prosthodontist in full-time private practice in the leafy suburb of Claremont, Cape Town, nestled at the foot of the Kirstenbosch Gardens.

When Dr Rabia Goolam decided that she would be an artist, it was never going to be in the traditional field of art, music or sculpture. That would have been too cliché. Instead she chose dentistry, because practised well enough; she could combine her artistic ability with her obsession for precision and attention to detail. Ever since graduating as a prosthodontist, every patient has been a new canvas and every smile that she has created has become her masterpiece.

Born and schooled in Cape Town, Dr Rabia Goolam graduated from the University of the Western Cape, Cape Town, South Africa in 1985 with a BChD degree, with a distinction in prosthetic dentistry. Immediately after qualifying, she joined the full-time staff in the Department of Prosthetic Dentistry at the University of the Western Cape where she was involved the clinical training and lecturing of the undergraduate dental students. Already as a final year dental student she knew that wanted to specialise in the field of prosthodontics.

In 1992 she graduated as a specialist prosthodontist with a MChD degree also from the University of Western Cape. Her dissertation for the MChD degree was entitled “The use of wrought wire clasps in partial denture construction”. The results of her study are now being used in the undergraduate dental programme on partial denture design. She remained for a short while as a part-time lecturer in prosthodontics, while setting up and establishing a private practice.

She has been in full-time private practice in Claremont, Cape Town for the past 19 years, specialising in full-mouth reconstructions with special emphasis occlusion and aesthetics, rehabilitation of the completely edentulous patient and implantology. She is passionate about improving quality of life through improving function and creating self-confidence by smile design. Her special interests in implantology include CadCam design, immediate function and aesthetics. She has restored more than two thousand dental implants.

She has presented several lectures to dentists, oral hygienists and dental auxiliaries in contining education courses and has been involved in the hands-on training of dentists in implantology. She has also attended several prosthodontic courses and congresses locally and internationally.